Baking a cake for someone is just about one of the most fulfilling things you can do in my opinion. Home-baked cakes just taste so much better, I guess because they are made with love instead of additives! I first made this cake for the original Mrs H, who I affectionately refer to as my smother-in-law. She is so loving and kind (and is probably the biggest chocoholic I know after Mr H) so it seemed only right to debut this recipe on her birthday!

When I created this recipe we’d been having a bunch of building work done (and were in between kitchens at the time) so I had to get super creative and tap into the magical superpowers of my beloved slow cooker. So really I guess it was a bit of a blessing in disguise!

The combination of sweet potatoes + slow cooker mean that this cake is unbelievably moist and gooey because all the moisture is retained. Plus it’s super sweet and chocolatey, and the frosting is so incredibly creamy. All in all, I think we’re on to a winner with this one!

First, chop the sweet potatoes into cubes and place in the slow cooker on high for three hours, until they are all soft (you can also boil them for about 20 minutes or so in a saucepan on the hob, but when I created this recipe the hob was unfortunately not an option!). Drain off any liquid, then mash these into a puree.

Pop the dates in a food processor and blend until they form a sticky paste. Then add in the sweet potatoes and the other ingredients and blend until a gooey and delicious chocolate-y mixture is formed. Line your slow cooker pot with baking paper and spoon in the cake mix. Try not to eat it all like we do! Slow cook it on high for another three hours, or until the top is brown and slightly hard but the middle is still gooey. Place in the fridge to cool.

To make the frosting, simply combine the ingredients in a bowl and whip until fluffy. Then smother your cake in it, making sure to lick the spoon, your fingers and the bowl. 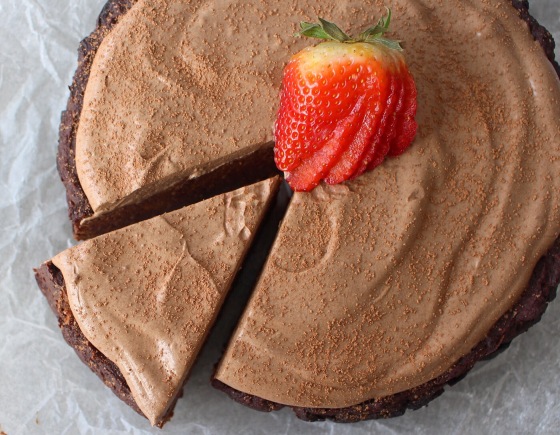