These cookies are potentially the best cookies that autumn has ever seen. I mean they tick all the boxes for me; something warm and gooey out the oven that I can have with a hot drink – tick. Something flavoured with all the best flavours of the season – tick. Oh and chocolate too? TICK TICK TICK. So you can understand why I’m excited to be sharing these cookies with you. They’re so lovely and cosy, spiced with cinnamon and nutmeg and with a little lovely hint of pumpkin in there too.

END_OF_DOCUMENT_TOKEN_TO_BE_REPLACED 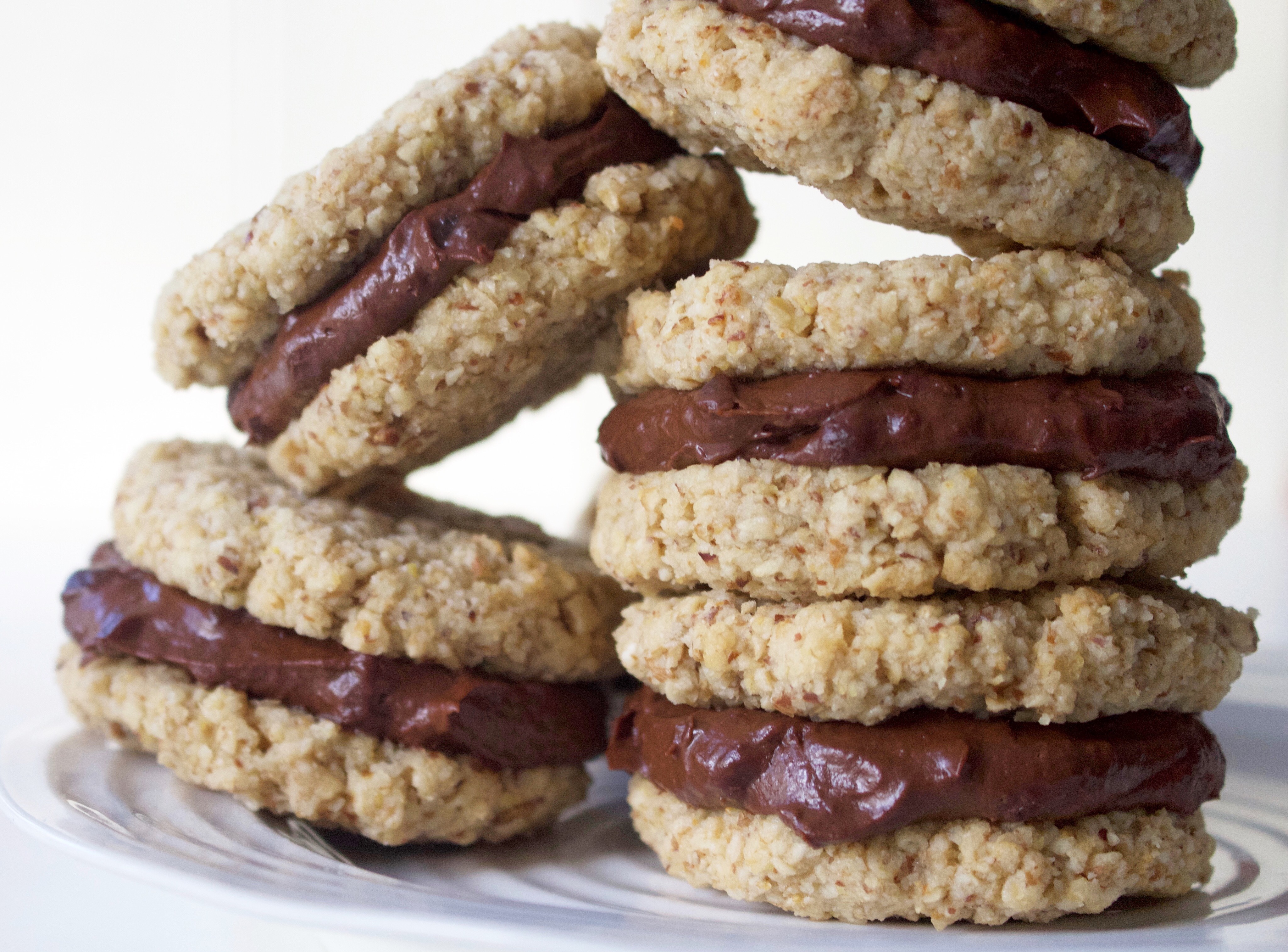 Last year I made jars of granola as Christmas/Hanukkah presents for my family. This year I think it might be cookies. Not only do cookies taste delicious you see, but also you can stack them high, wrap them in some cellophane with a nice piece of ribbon and hey presto, just call me Santa. END_OF_DOCUMENT_TOKEN_TO_BE_REPLACED

Since having baby H I’ve been introduced to the wonderful world of Peppa Pig, which I’m not going to lie, I do kind of like. But our house seems to be slowly turning into something akin to a shrine to all things Peppa, which I’m not quite so down with. But that’s just part and parcel of having a little one I guess, so I’ll take it! END_OF_DOCUMENT_TOKEN_TO_BE_REPLACED

My hobnob recipe has been one of THE most popular recipes from my blog, and I can’t say I’m surprised. Who knew that with just a handful of natural ingredients it would be possible to create the most delicious biscuits known to man!? I’ve made them so many times I’ve lost count (although that happens a lot these days – baby brain is apparently still a thing long after the baby has arrived), and the other day I had some leftover caramel that I needed to use up (I was very close to just eating it with a spoon but managed to restrain myself) so I decided to jazz up my hobnobs and take their amazingness to a whole new level.

And boy was it a success and a half. I think these might be even better than the original, they’re just insane! All the tastiness of my original version but with a surprise gooey sticky caramel filling in the middle. Prepare to be transported to teatime heaven guys, you’re (literally) in for one hell of a treat!

For the caramel filling

For the chocolate on top

To make the biscuits, just combine the ingredients in a mixing bowl and stir well so that everything is all nicely combined. Preheat the oven to 180C and bake for 15 minutes – the biscuits might still seem a little soft in the middle but they will continue cooking after you take them out so don’t worry!

Leave them on a cooling rack for an hour or so then make the caramel by blitzing all the ingredients in a food processor or blender until they form a sticky gooey mixture. Spoon this on top of the biscuits and spread out the caramel with the back of your spoon to cover them evenly.

Pop them in the freezer for 10 minutes to set then make the chocolate by melting the cacao butter in a  bowl over a saucepan half full of water and then stirring in the other ingredients. Dip the biscuits in the chocolate (you might want to do this a couple of times for each biscuit) and then drizzle any extra chocolate on top. Leave them in the fridge for a couple of minutes so that the chocolate sets, put the kettle on and get your favourite tea brewing and dig in! 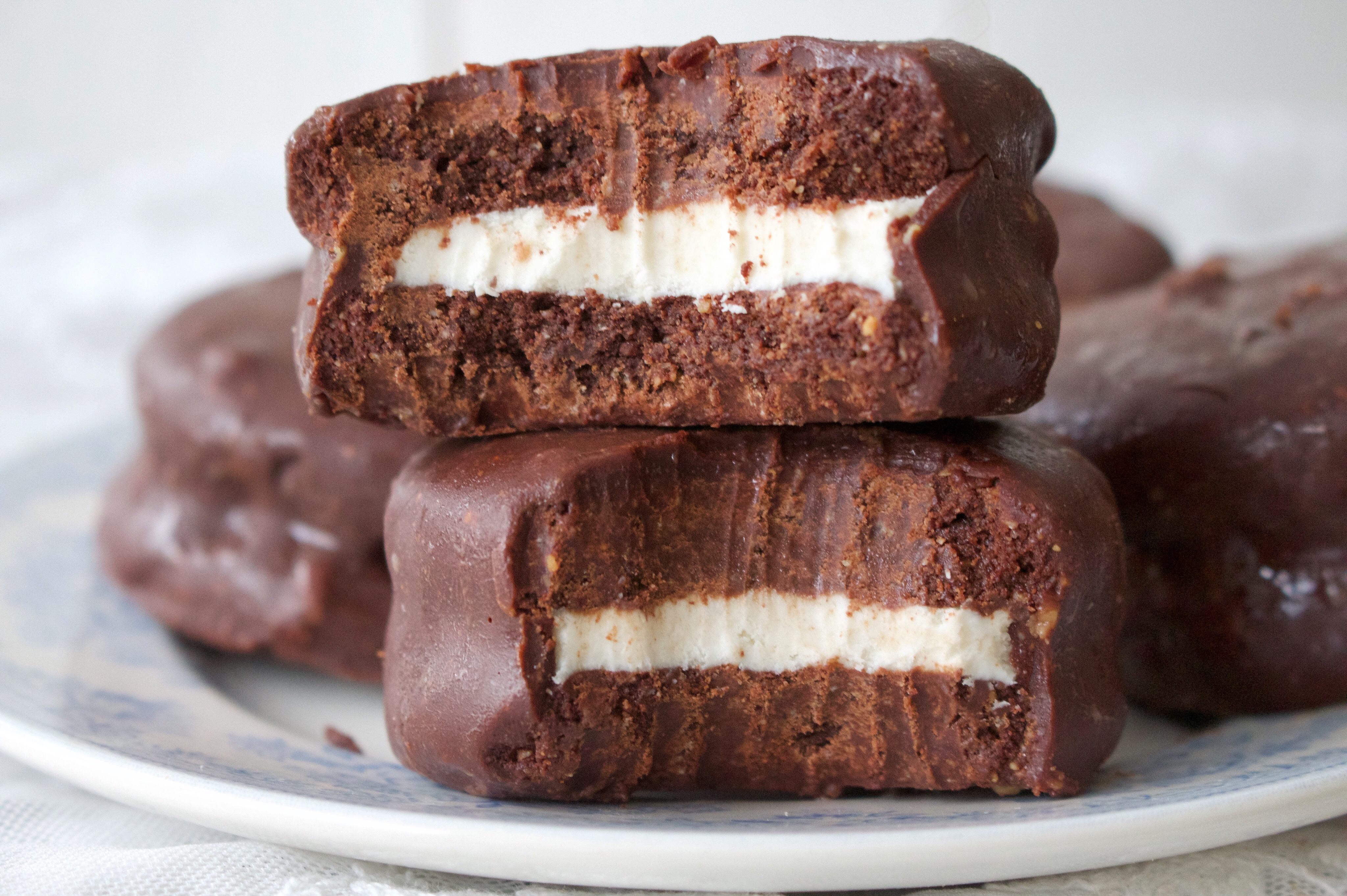 I’m sure I’ve told you this before, but every time I go to the US my visit includes at least one visit to some sort of CVS, Duane Reade or the like. I don’t know what it is about American pharmacies, but they totally shit all over Boots and Superdrug. My favourite aisles are the nail polish aisle (oh to behold the colours) and the snacks aisle, although the latter is more to buy presents for friends and family these days than to buy myself any such sugar-laden delights. END_OF_DOCUMENT_TOKEN_TO_BE_REPLACED

These are my new tea-time favourite. There’s just something about the combination of spicy ginger cookies and creamy vanilla filling that equates to the ultimate win in my book, and when combined with a cuppa, well we’re talking maximum 3pm bliss right here.
Oh and can we discuss the unparalleed GENIUS (or should that be genii if we’re being clever – first declension plural love for all my fellow Latin geeks out there) that are cookie sandwiches!? END_OF_DOCUMENT_TOKEN_TO_BE_REPLACED

I was making my Christmas granola, and as I sprinkled in the figs at the end I realised that in all my time creating healthy recipes I’ve kind of neglected them as a fruit! So this recipe is effectively my apology to all the figs out there, although for all I know, they probably don’t even give a fig. Right then, obligatory fig pun out of the way let’s forget it ever happened and cut to the chase shall we?  END_OF_DOCUMENT_TOKEN_TO_BE_REPLACED

If I’ve learnt anything about being a Hollingsworth it’s that when it comes to food, if you snooze, you most definitely always lose. As my lovely husband explained to me after the other half of a cookie I was eating was pinched from under my nose by someone who will remain nameless, ‘if it’s not on your plate it’s fair game’.

END_OF_DOCUMENT_TOKEN_TO_BE_REPLACED

I’m finding more and more that I keep running out of time – I always seem to be rushing around and I honestly don’t know where the days go. People used to tell me that time gets quicker as you get older and I definitely believe it now. I also think that because I’m doing something I love I’m not just sitting at a desk twiddling my thumbs and clock watching, but whatever it is I have to really make a conscious effort to spend a little time each day being mindful, for my own sanity if not everyone else’s! END_OF_DOCUMENT_TOKEN_TO_BE_REPLACED

Sometimes when I’m creating recipes they evolve as they go along; these cookies began life with every intention of coming out looking like Jammy Dodgers (one of my fave childhood biscuits) but as you can see they didn’t quite get there. Well the first batch did – I spent ages painstakingly shaping them and cutting out hearts in the middle with tiny cookie cutters and I’ll be the first to admit that for all the faff they did look fab, but boy did they take forever. And that’s not what we’re about here at D&H; gourmet pastry chefs we certainly are not. We like easy, quick and simple recipes that taste delicious and don’t contain millions of ingredients. END_OF_DOCUMENT_TOKEN_TO_BE_REPLACED