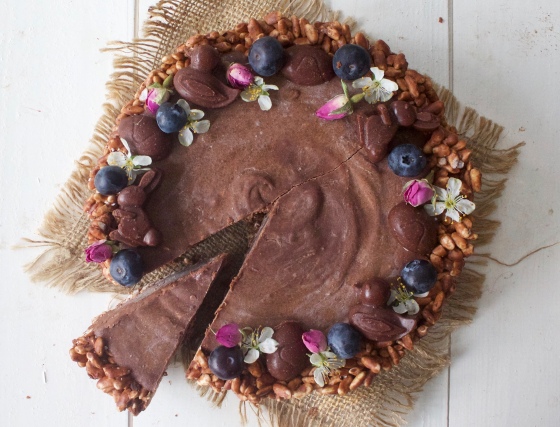 I love rice Krispy cakes any time of year, but there’s something very Eastery about them indeed. Make them into a nest and chuck some eggs in the middle and you’ve got the perfect easy to make Easter treat. I wanted to give the traditional version a little twist, and when it comes to desserts I’m pretty sure the ‘less is more’ rule doesn’t apply, so I thought I’d make a big old nest filled with the most indulgent chocolate ganache and decorated with homemade chocolate eggs.

END_OF_DOCUMENT_TOKEN_TO_BE_REPLACED 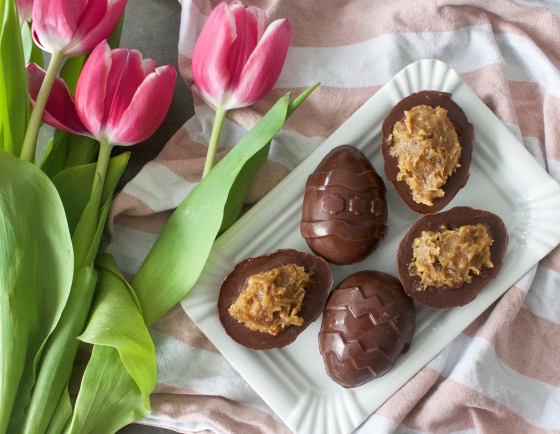 Last Easter, when baby H was 21 months (and baby H 2.0 was just a twinkle in his daddy’s eye) we went on an awesome trip to Washington DC. It was great with a toddler, loads of things to see, so many museums (which were all free entry, even the zoo) and delicious food. But the highlight for baby H was definitely Easter Sunday. END_OF_DOCUMENT_TOKEN_TO_BE_REPLACED

I know you know about rocky road, but what if I told you there was an equally as delicious version that comes out around this time of year? Because I don’t know about you, but I love me a little white chocolate version of anything, and these are just sublime.

In the winter the rocky roads tend to get covered with a little snow you see. Sounds treacherous, but luckily our friends with their glitter vans are usually on the case. But they haven’t made it to my kitchen (guess it would be weird if they did not to mention a bit messy) so my roads are officially snow-covered. END_OF_DOCUMENT_TOKEN_TO_BE_REPLACED 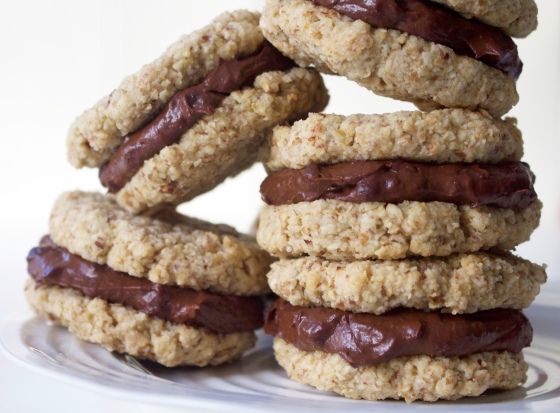 Last year I made jars of granola as Christmas/Hanukkah presents for my family. This year I think it might be cookies. Not only do cookies taste delicious you see, but also you can stack them high, wrap them in some cellophane with a nice piece of ribbon and hey presto, just call me Santa. END_OF_DOCUMENT_TOKEN_TO_BE_REPLACED

Now I do like mince pies, but I know a lot of people that don’t. And you guys know how I like to be inclusive etc and even more so how I like to chocolatify everything I touch. Like Midas, but chocolate instead of gold. Can you imagine? What a delicious/hazardous life that would be, in equal measures. END_OF_DOCUMENT_TOKEN_TO_BE_REPLACED 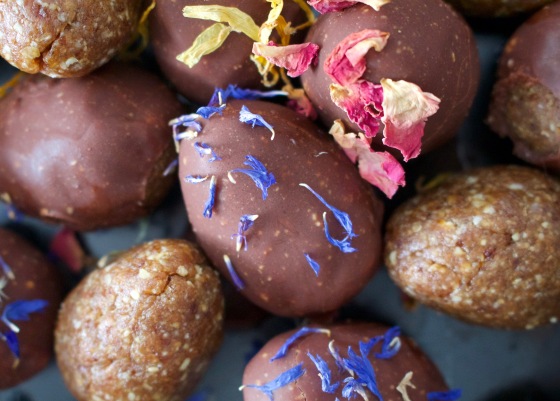 Easter is totally one of my favourite times of year – spring is springing, we get a four day weekend and it’s completely acceptable to eat as much chocolate as physically possible. What’s not to like!

I wanted to celebrate this year by creating something a little different, because as much as I love chocolate eggs (and boy do I love them), it’s nice to mix it up sometimes too. We’ve got four days after all! Now these beauties may look and sound pretty fancy, but they’re actually really easy to make. You just need a handful of ingredients, a quick whizz in the food processor, and then a dip or three into the most delicious raw chocolate imaginable.

END_OF_DOCUMENT_TOKEN_TO_BE_REPLACED

I was making my Christmas granola, and as I sprinkled in the figs at the end I realised that in all my time creating healthy recipes I’ve kind of neglected them as a fruit! So this recipe is effectively my apology to all the figs out there, although for all I know, they probably don’t even give a fig. Right then, obligatory fig pun out of the way let’s forget it ever happened and cut to the chase shall we?  END_OF_DOCUMENT_TOKEN_TO_BE_REPLACED

Is it going to be a white Christmas? Probably not – it seems to only ever snow at weird times like March these days, never in December when I swear it’s supposed to, and when I’m sure it used to. I can’t wait to take baby H out in the snow for the first time, but I reckon we’ve got a few months to wait before that happens. Worst comes to worst we are going skiing with Mr H’s family in Feb, so fingers crossed that’ll be snowy otherwise it’ll be a bit of a wasted trip! END_OF_DOCUMENT_TOKEN_TO_BE_REPLACED 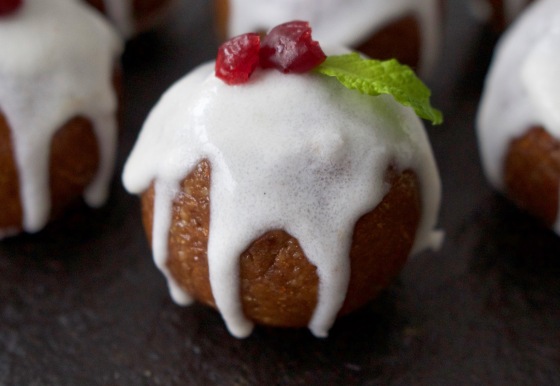 Poor old Santa. Not only does he have the busiest day ever on Christmas Eve rushing around the WHOLE WORLD delivering presents, but all he gets from well-meaning parents around the globe to keep him going is a stodgy mince pie or two. No wonder he’s so fat. Personally I think Rudolph gets the better deal – I’d take a carrot over a mince pie any day of the week to avoid all that refined sugar and gluten in my tum.

Well this year, things are going to change in the Hollingsworth household. After having to help squeeze her husband out of one chimney too many, Mrs Claus has had a word with Mrs H and together we’ve decided that what the big FC needs are energy balls. But he’d be upset if they didn’t have a festive touch (he does wait around for it for 364 days a year in the most freezing country ever after all) so I’ve come up with these Christmas pudding energy balls.

They’re just divine – fruity, chewy and packed with Christmas spices and flavours – and they’re totally guilt free! And they look pretty cute too – I’ll be serving some up on the 25th for sure as Santa shouldn’t be the only one who gets to enjoy these! And who knows, the man himself might be cutting a much svelter figure this time next year!

For the balls, pop the ingredients in a food processor and whizz for 2-3 minutes until gorgeously sticky and gooey. Put the mixture in the fridge for half an hour to allow it to harden a little, then roll into balls and place in the freezer for at least an hour so that the icing sticks nicely.

To make the icing, simply add the ingredients to a blender or mixing bowl, and blend or stir until everything is completely combined and you have a lovely runny icing. Remove the balls from the freezer and drizzle the icing on top with a teaspoon. Decorate with mint leaves and berries and there you have it!

Easter is a fabulous time when it comes to delicious desserts and sweet treats, and whilst the majority are either chocolate-based and/or egg-shaped, there’s just something so delicious about hot cross buns. I don’t know if it’s because they feel so ‘traditional’ and have been around for so long, but there’s just something so comforting about them. END_OF_DOCUMENT_TOKEN_TO_BE_REPLACED