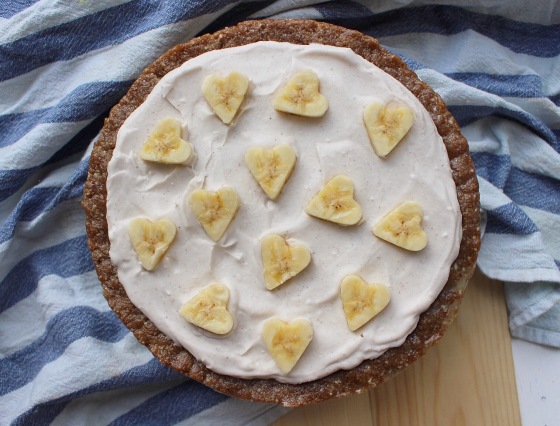 Whoever first thought to combine bananas and toffee to come up with banoffee pie is a genius, and I hope they received at least a Knighthood for their services to dessert (and maybe even a Nobel prize as well). I never actually used to like banoffee pie because of my sheer hatred (and fear) of bananas, but as a recovered banana-phobe, I’m definitely making up for lost time.

The beauty of this dessert is many-fold (if that’s a word?); it’s just so easy to make, it doesn’t require an oven, it only uses ten ingredients (which isn’t so many considering it has three separate layers), it’s totally gluten free, dairy free, refined sugar free and not to mention guilt free, it looks pretty impressive if you’re serving it up to friends or family and it’s a great way to win over those sceptics who don’t believe how anything ‘healthy’ can also be remotely palatable as its downright delicious too.

So if you’re looking for a healthy dessert to make and you love yourself a bit of banoffee, this is definitely going to go down a treat!

For the caramel banana filling

For the crust, simply pop the cashews, pecans and dates into a food processor and whizz for a couple of minutes, until they form a crumbly, sticky mixture. Using either a round silicon cake mould or pie dish, spoon the mixture in and press it down so that it covers the bottom and sides evenly.

To make the caramel banana filling, put the dates, almond milk and almond butter in a food processor and mix for a couple of minutes until the mixture is all lovely and smooth. Chop up the bananas into small slices, put them in a mixing bowl and stir in the caramel mixture. Once it’s all mixed in, spoon this onto the crust and smooth it out with a spoon so that it’s all even. Place the pie in the freezer so that it sets a little while you make the final layer.

To make the cream, add the ingredients (except the bananas) into a bowl and stir for a minute or so until everything is mixed in. Remove the pie from the freezer and spoon the cream onto the top, again smoothing it down to make it nice and even. If you fancy giving it a little decoration on top, chop up a banana or two into slices or shapes and let your creative juices flow!