The day I created this recipe, it was one of those rare super hot days which don’t come around all too often in London. I’d been brainstorming about chocolate fudge covered raisin flapjacks and was really happy with my flapjack mixture (I tested it lots) but I just couldn’t face going anywhere near the oven to bake it. It was just too hot. So I made a couple of tweaks and the result was these insane no-bake chocolate fudge covered raisin flapjacks.

When I first made them it was so warm and sunny outside that my coconut oil had gone liquid so I didn’t even need to melt it, which is great as it meant less washing up. All I needed was a mixing bowl, a spoon and six ingredients. You can’t get much simpler than that right?

These are honestly one of my favourite things I’ve ever created and personally I think they are miles better than any sort of store-bought alternative. In fact, they’re so quick and easy to make that in the time you got to the shops and back I reckon you could have whipped these up and be sat down with your feet up eating one (or three) with a cup of tea in hand.

For the chocolate fudge

To make the flapjacks, just combine the ingredients in a mixing bowl and stir well. Spoon into a lined baking tin or mould and press down evenly to make sure the mixture is all compact, otherwise it won’t stick together nicely. Pop it in the fridge while you make the fudge.

For the fudge, again just add the ingredients to a mixing bowl and stir until you have a thick chocolatey mixture (don’t worry if it seems quite liquid as this will set in the fridge). Pour it on top of the flapjacks and put them back in the fridge for an hour or so to allow them to set. Alternatively if you’re impatient like me you can always put them in the freezer and they will set quicker. Cut them into squares and enjoy! 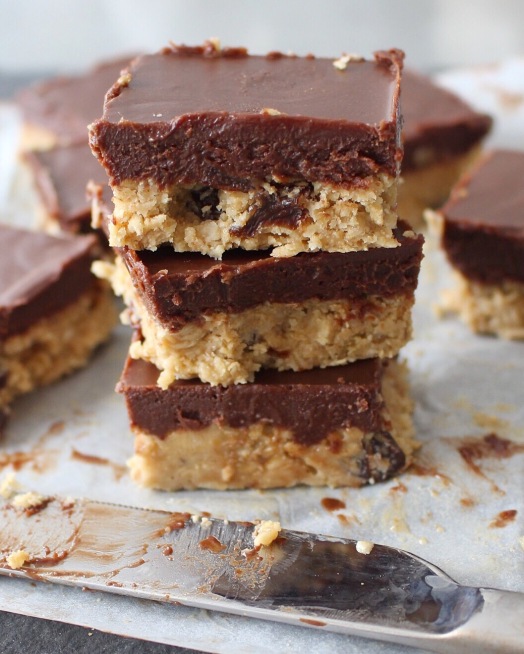