I love making my own almond milk – it’s ridiculously cheap, so tasty, super easy and gives me the peace of mind that I know exactly what has gone in to the milk I’m pouring into my morning porridge or afternoon matcha latte. I used to feel a bit wasteful though throwing away all that almond pulp that gets left in the strainer, so I started thinking about what I could use it for.

A couple of taste tests later, and I came up with these amazing almond milk pulp, oat, raisin and cinnamon cookies. They only have six ingredients, and they’re so delicious. They’re also super economical to make, and they make such a great energy-boosting snack . They’re chewy, oaty and sweet, just how a good cookie should be!

Give the almond milk pulp a little squeeze to get some of the excess liquid out of it, but don’t worry about doing it too much as we don’t want it to be too dry either. Pop the pulp in a bowl with the oats and sultanas and give them all a big stir. In a saucepan, melt the coconut oil, then stir in the maple syrup and cinnamon. Pour the mixture over the oats, almonds and sultanas and stir in well so that you end up with a dough.

Roll the dough into little balls and flatten them with your hand to get nice round cookie shapes (or use cookie cutters if you’re going for the fancy look!). Pop them on a baking sheet and bake in the oven at 180 degrees for about 15-20 minutes, until they are golden on top. 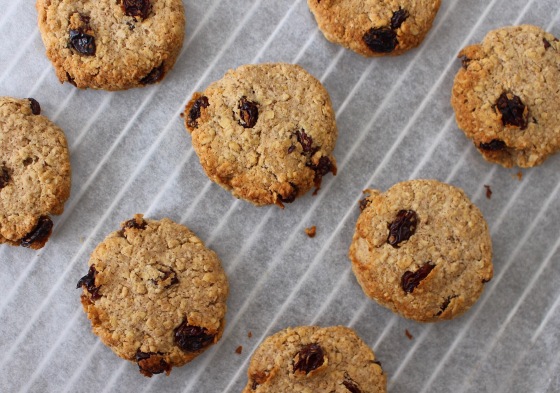