These have been a LONG TIME COMING. If you came down to my market stall in Hampstead you’d know that I’ve mastered the Snickers, conquered the Ferrero Rocher and perfected the Bounty, but the Twix has always been on my hitlist. That’s right, I’m healthifying chocolate bars like nobody’s business and boy am I having fun doing it.

Twix bars (along with KitKats) were one of my favourite chocolate bars as a kid, mainly because the fact that they had two fingers made me feel like I was getting double as much. The more chocolate the better after all. Although for me (and I’m guessing for you too as you’re reading this) not that kind of chocolate any more. So what if I told you you can make yourself the most amazing Twix bars EVER with just EIGHT natural ingredients (if you don’t count salt that is, I don’t, in my eyes it’s more of a condiment). But the best thing about these? They don’t come in a wrapper with just two fingers, so I’ve been known to eat three, maybe even four in one sitting (it had been a long day, don’t judge me) and I just know once you try these you’ll understand. I’ve had to hide these from Mr H otherwise I don’t even get a look in before they all disappear. I won’t tell you where in case he reads this but lets just say that some of the opaque tupperwares in our fridge labelled ‘baby food’ might not be all they seem…

Anyway, I digress and you’re probably already preheating your oven (to 180C) as you’re so excited to get started making these so I promise I won’t hold you up any longer. But I will say this – you might want to get yourself some non-see through tupperware boxes and some labels too. You can thank me later.

For the biscuit base

For the chocolate coating

To make the base, blitz the oats in a food processor for about a minute until they form a flour, then combine with the other ingredients in a mixing bowl and mix with your hands until they form a sticky dough. Split this into 12 equal size balls and then either shape them into fingers or pop them in bar shaped moulds if you have them. Bake in the oven at 180C for 10 minutes, don’t worry if they seem a little soft when they come out as they will harden as they cool.

Leave the biscuits to cool for about half an hour, then combine the caramel ingredients in a blender or food processor and whizz for a couple of minutes until smooth. A little tip – I like to double up on the caramel when I’m making it and put the other half in the freezer (in one of the aforementioned tupperwares) to save me making it next time as it freezer really well. Spoon the caramel on top of the biscuits, using the back of a teaspoon to spread it all out evenly, then pop the biscuits in the freezer for around an hour (or longer if you have time, the longer they are there for the better the chocolate will stick).

For the chocolate, melt the coconut oil in a a bowl over a saucepan half full with boiling water, then stir in the other ingredients and mix well. Dunk the biscuits one by one into the chocolate, then repeat until you’ve used all the chocolate/the biscuits have a delicious thick chocolate coating! Pop them in the fridge for 10 minutes to let the chocolate set, or if you’re not bothered or like me you’re very impatient just eat them straight away! 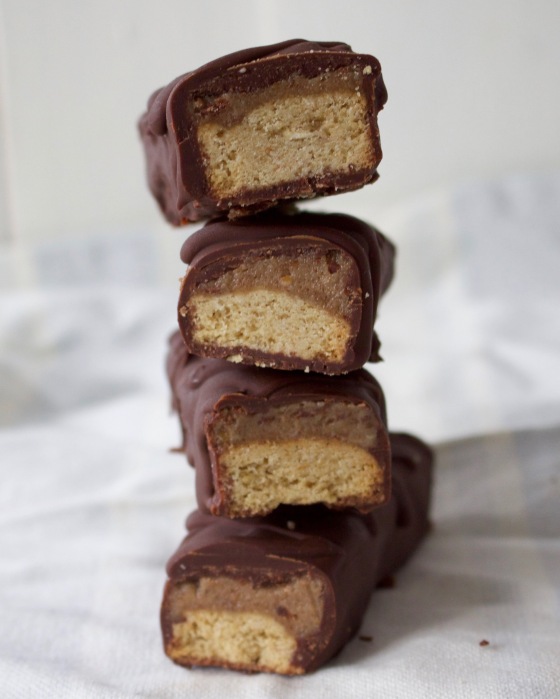