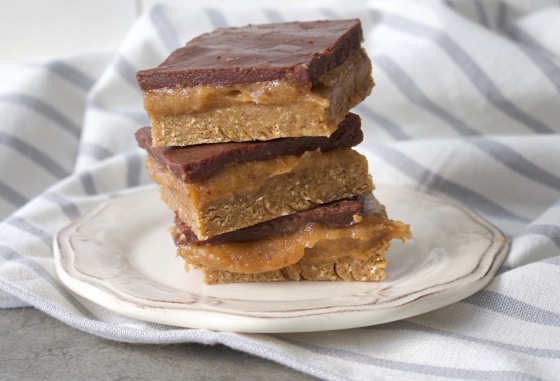 Millionaire shortbread (which apparently owes its name due to its richness) originated in Scotland in Elizabethan times, and is now enjoyed worldwide. In some countries it goes under the more sensible but less imaginative name of caramel slice, but we’ve tasted that too and it’s just as delicious.

To tell the truth, I can’t even begin to describe how delicious it is, so I would recommend you make it too so that you can understand. And, as the name suggests, it is quite a rich treat so you only need a little slice to satisfy those sweet cravings.

This recipe is just so simple to make, it doesn’t require any baking and you only need nine ingredients to make all three layers. However, it looks bloody impressive, so feel free to pretend to whomever you serve it to that it took you hours and required the baking skills of a Cordon Bleu chef!

For the shortbread crust:

For the caramel layer

For the chocolate layer

To make the shortbread crust, simply whizz the oats, dates and ground almonds in a food processor until they form a sticky, slightly crumbly texture. Spoon this into a lined baking tray or mould, and press it down so that it is all spread evenly. Pop it into the fridge to allow it to set while you make the other layers.

For the caramel, add the dates, almond milk, vanilla extract and almond butter into a blender and blend until they form a thick, gooey and smooth mixture. Pour this over the shortbread crust, smoothing it out with a spoon to make it all nice and even. Once this is done, put it in the freezer so that the caramel layer sets a little before you pour on the chocolate.

Now for the best bit! In a saucepan, melt the cacao butter until it turns into a clear yellow liquid. Then stir in the cacao powder, maple syrup and almond butter and keep stirring until it’s totally smooth. Pour the chocolate over the caramel layer and place the shortbread in the fridge for ten (agonisingly long) minutes to allow the chocolate to set. 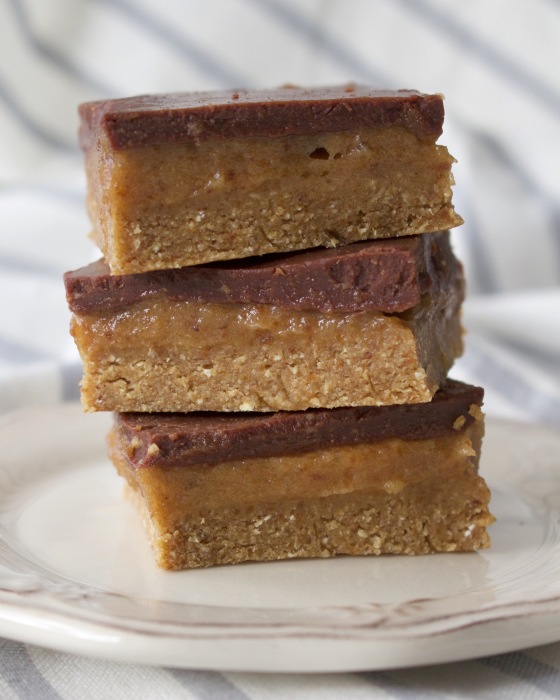