One problem with both myself and my taste testing entourage being serious, hardcore chocolate addicts is that sometimes it can be hard to get unbiased feedback on my non-chocolatey recipes. It’s almost as if they’re slightly discriminated against. So when I decided to leave the cacao powder in the cupboard and whip up some blondies instead of brownies I wasn’t sure what kind of backlash I might face.

Luckily, taste testers 1 and 2 are both massive peanut butter fans. So I think I might have found a loophole around the chocolate bias with this recipe…because these peanut butter blondies went down a storm with them both (and me). So much so that the whole tray was devoured before I could even ask if they liked them.

These blondies are gooey, fudgy and just so amazing that I defy you not to love them too. Oh, and I did stick in some chocolate chips too, because I just couldn’t resist. Can’t be going completely cold turkey now can we!

Preheat your oven to 180C. Pop the ground almonds and buckwheat flour in a bowl and mix well. In a separate bowl, stir together the peanut butter, almond milk, maple syrup and vanilla, then cream in the coconut oil (melt it a little bit if it’s very hard). Pour this mixture into the other bowl and mix well. Finally, chop the chocolate into chunks and stir these in.

Spoon the mixture into an 8″ square baking tin or mould, then bake for 25 minutes. Allow to cool before cutting into delicious squares! 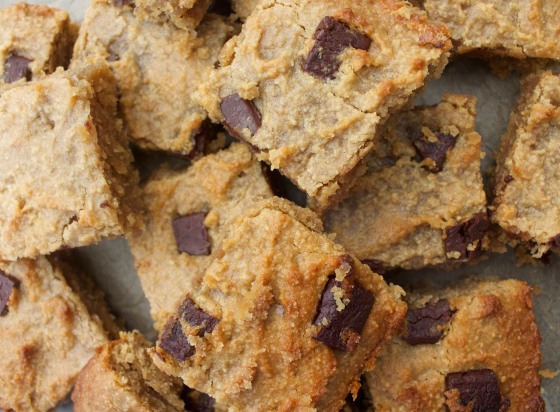