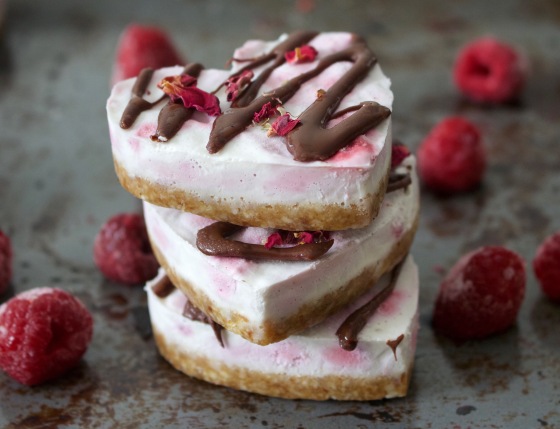 I’m not a massive ice cream person these days, but when I was younger we’d always have raspberry ripple ice cream at my grandparents house for dessert, and I used to love it. So I guess this recipe is somewhat of a nostalgic one, but with a healthy twist. Raspberries are one of my favourite berries, I get so excited when they come into season (and so sad when they go out of season, but I guess that’s what my freezer’s for) and this year I was desperate to go raspberry picking. However with the arrival of baby H we had a pretty busy summer so we never quite managed to go, but it’s definitely on my list for next year! If you have any recommendations of where’s good to pick them near London please do let me know!

But back to the raspberry ripple, if you’ve checked out the rest of my recipes you’ll know I LOVE a raw cheesecake, so of course it seemed only right to get a raspberry ripple version on the blog too! These beauties not only taste absolutely scrumptious but they look so pretty too, they make a fabulous dinner party dessert and they went down a treat recently when I took them to my niece’s fifth birthday party. I hope you love them too!

For the raspberry ripple layer

To make the base, pop the ingredients in a food processor and blend for a couple of minutes until they form a sticky mixture. Spoon this into moulds and press down evenly, then place in the fridge while you make the raspberry ripple layer.

For the raspberry layer, place the coconut cream, cashews, coconut oil and maple syrup in a food processor or high speed blender for around five minutes until they form a smooth and creamy mixture. Spoon half of this in a bowl and set aside. Add half the raspberries to the remaining half and blend again until creamy.

Take the remaining raspberries and break them up into small chunks, then scatter them in  the moulds and spoon alternate teaspoons of the plain and raspberry mixtures on top until the moulds are full. Use a skewer to swirl the mixtures together to get the ripple effect. Place the moulds in the freezer for at least two hours to allow them to set, then remove from the freezer half an hour before eating. Top with a little raw chocolate for extra deliciousness! 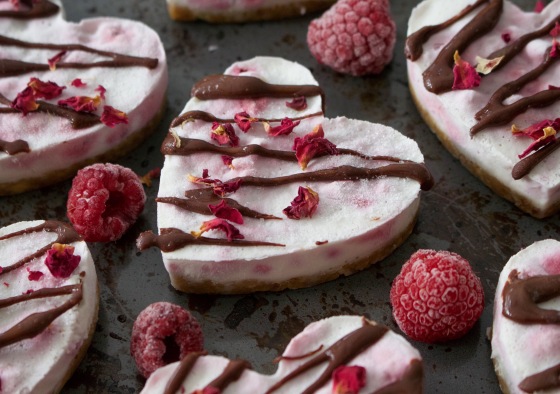